You can find 72 different trims for the Hyundai Santa Fe and their corresponding recommended tire pressures.

The years available stretch from 2005 through to 2020 with the tire types underneath the yearly headings. 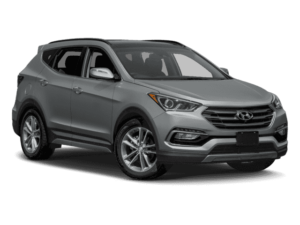 The first compact crossover SUV from Hyundai, the Santa Fe offers versatility and value in a practical package.

It was launched alongside the Kia Sorento and share most of the same mechanical components with very similar designs.

The ample cargo volume is accessible when you need it thanks to a tailgate that opens up to 34-inches.

Despite its boxy angles and chunky looks, the Hyundai Santa Fe has received positive reviews from automotive critics.

They liked the overall versatility of its design but criticized it for being a bit too noisy and rough around the edges when compared to other crossover SUVs in the market.

Since the first-generation model made its way into showrooms back in 2004, the Hyundai Santa Fe has been redesigned to accommodate different engines and parts.

It’s also been given a more refined rear fascia and an engine cover that features a chrome finish that matches the grille mesh.